“My passion for cuisine started when I studied at Hoa Sua school. I never dream that this is a job I work along time...”. This is sharing of  Nguyen Vinh Quang about the time at Hoa Sua school – where he makes his dream come true.

Firstly, he went to Hoa Sua school he didn’t also like this job and find his favourite. However after a month studied with easy foods, he really like it when he practice and cook basic meals. Quang was comment very well by teacher in 1 year. After graduated at Hoa Sua school, Quang has found his dream job.

First step to the cook and had many different after graduate, Quang worked at Fusion restaurant – 51b Quoc Tu Giam. 2 years work at this restaurant, he was improved his knownledge and skill. He cooks Asian food very well, but he would like to studied European cuisine  through many time communicated with customer and saw chef making European food. He was continued study European food at restaurant with support from colleague. Quang is very confident to said that he can cook Asian and European food.

Now he is HeadChef at Fusion restaurant for 2 years. After the time at Fusion, Quang also works at diferent restaurant in Quan Su street. The money he can get is 14 tr/ month.When was given question in the future, he talks that he wants to work at Fusion in along time before thinking about big plan in the future. 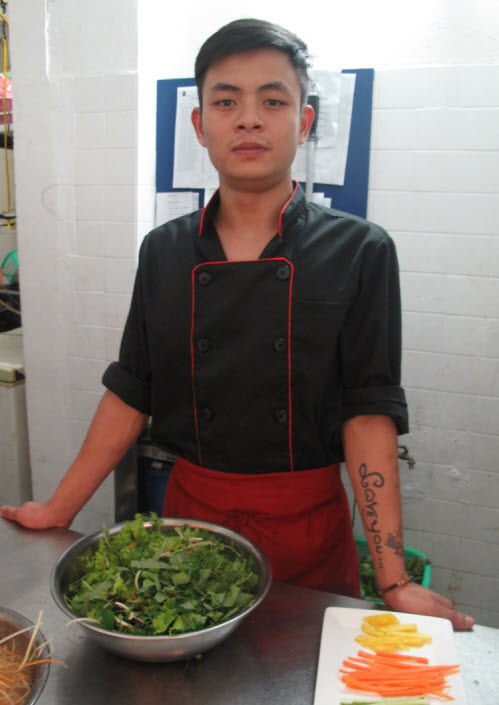